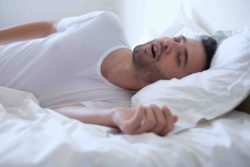 A Guide to Sleep Apnea

The Categories of Sleep Apnea

There are three distinct types of sleep apnea. with the most common being obstructive sleep apnea (OSA), which occurs due to a physical blockage such as the collapsing of the soft tissue at the back of the throat. Central sleep apnea (CSA) is a less common type of sleep apnea, in which breathing stops because the muscles involved aren’t receiving the proper signal from the brain. Some suffer from mixed or complex sleep apnea, which is a combination of both CSA and OSA.

Who is Most at Risk?

The data shows that sleep apnea is more common in men than women, and particularly in older adults above the age of 40. It’s important to note, however, that anyone can experience sleep apnea. Patients who smoke, drink, and are considered obese are also more likely to experience sleep apnea, and the condition is commonly passed down through family generations. CSA is found most often in patients with strokes, brain tumors, neuromuscular disorders and heart disorders.

Is Sleep Apnea an Ongoing Danger?

In the medical community, sleep apnea is widely considered to be a significant medical issue and when left untreated can lead to high blood pressure, which then increases the risk of heart failure and stroke. In addition, the fatigue caused by sleep apnea can also cause problems at work and at work, as well as present a danger to those driving every day. Sleep apnea can also cause issues with anesthesia. It’s the reason that it’s so important to let your doctor know if you suspect you’re suffering from sleep apnea.

Sleep apnea is treated based on the severity of the individual case and the type of apnea. Some basic forms of treatment involve behavioral changes. For example, the patient might be instructed to lose weight or stop smoking. Additional treatments might involve oral devices that can be used to position the mouth so that blockage is prevented. In the most severe of cases, surgery could be required.

What Should I Do If a Loved One Suffers from Sleep Apnea?

If you or a loved one suffer from sleep apnea, it’s important to speak with a specialist. Our team can help you get a referral for a sleep study or other forms of diagnosis. This then provides the ideal treatment platform. To discuss your sleep apnea issue with an expert, or to get a referral, call us today!

Top 5 Helpful Tips to Find the Best Orthodontist in Phoenix