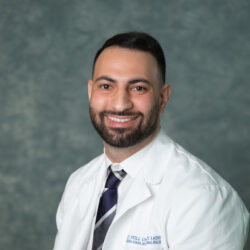 Dr. Omar Karaboulad is an Arizona native. He is the oldest of four, with 2 brothers and one sister. They all reside in the East Valley. He attended Chandler High School and received his bachelors degree in biomedical engineering from Arizona State University. Dr. Karaboulad completed his doctorate and certificate in public health at the Arizona School of Dentistry and Oral Health (ASDOH) in Mesa.

A leader in his community, Dr. Karaboulad is heavily involved in community service, both in the field of dentistry as well as outside projects. He has been a part of the Give Kids a Smile (GKAS) event since 2016 and remains on the board of the event. He also enjoys working with special needs patients, educating parents and children in different centers about oral hygiene, and served as a Pop Warner football coach.

Dr. Karaboulad began building his brand in 2017 as “The Real Dr. Phoenix.” From dental school to present, he networks with athletes, celebrities, artists, and other influencers. The Real Dr. Phoenix joins forces with Dr. J Dental, who he states is “a mentor, leader and an older brother to me”. Outside of dentistry, he enjoys spending time with family and friends, working out, playing football and basketball, traveling, and recording his YouTube/ IGTV series “Skill Swap”.

Top 5 Helpful Tips to Find the Best Orthodontist in Phoenix